Puppies and adults - sometimes it's not that simple 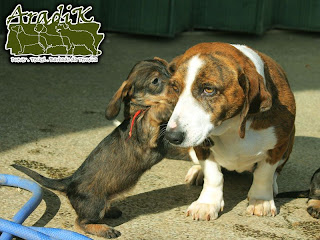 A question I was e-mailed some time ago:

Good evening, I “accidentally” stumbled upon your blog thanks to a research I was doing about “how to connect my dogs”. If it is not too much of a bother, and as I see you are experienced in this field, I would like you to answer me this question, if possible.
So this is the situation, I have a 6 year-old Labrador Retriever, very sociable, loving, stable and now very thoughtful. He sometimes has those bouts of excitement when he is with another male but this behavior disappears quickly after they meet.
This is to say that Bronco never had any problems with other dogs, and I’m referring to fear, anxiety, …
The thing is a short while ago he was bitten, not seriously, by an Alentejo Mastiff, because I was careless and it happened in less than a fraction of a second, and I am afraid that he is now somewhat afraid of other dogs (this is my first conclusion).
And why? Because almost 2 weeks ago I brought home a Great Female, and she obviously wants to play with him, and ends up annoying Bronco a bit and his defense mechanism is simply to run away from her.
On the 1st day he was very interested, but when he realized “that little thing” was staying he changed his behavior
I have been keeping both of them separated, he has full access to the house and she is in the balcony, properly arranged. During the day I have them together 2 to 4 times in the patio, never more than 30/45 minutes. This time is spent as I described, she want sto play and he runs away and avoids her, but still shows some interest. And the issue of him being afraid of other dogs is over, because this weekend a friend brough his dog over (the 2 of them never met) and shortly thereafter they were playing.
This said, I ask if I should change anything, or what am I doing wrong? This is something that has me worried because I never thought it would play out like this.
Daisy is almost 3 months old and I think she doesn’t interpret well some of his signs. And I don’t think it’s jealousy as they eat at different places and at different hours.
I would really appreciate it if you could help me out.

Before replying to your questions, I need to stress one thing… It is impossible to discuss actual cases without seeing the situation and the dogs, preferably on their environment. I will tell you what I understand from your description, but take this as general guidelines, not something specific to your particular case. There are usually many subtleties in canine communication that most owners don’t realize (including some supposedly experienced dog people), which may change the whole meaning of a person’s interpretation of a situation.

So, now, regarding your doubts… it seems to me we have two independent questions…

1st – The Labrador being bitten
I cannot say anything about possible fears regarding other dogs without seeing how he behaves, but the fact that he quickly started playing with your friend’s dog seems to suggest no long-lasting sequels.
A serious bite in a puppy may sometimes cause some traumas, with him associating that situation to a given stimulus – the place he was when bitten, the type of dog that bit him, the person he was with, etc. But with an adult dog, especially with your dog’s age, and a slight bite, this usually leaves no long lasting negative memories…

2nd – The Labrador and the Great Dane
Based on your description of this situation, I have a totally different interpretation! ;)
Let’s switch species… Imagine you’re quietly at home, resting, and a child keeps coming up to you, bouncing around, pulling you to play when you just want to rest, because you’re tired from work. What do you do? Yeah, exactly!... Your Labrador is actually showing a very balanced behavior!
Ok, so this is not the image we get “sold” when we get a puppy, that he and the older dog will be best buddies, but that is not out of the question.
Quite simply, it seems here that he puppy is a bit too “annoying” with the Labrador, a bit too “pushy”. And as the well-behaved dog he is, Bronco goes away to seek some peace and quiet instead of grumbling at the pup.

Usually, adult dogs withstand a lot from young puppies, avoid correcting hard and let them do a lot of stuff they would never allow older dogs to do. This may lead to some puppies getting too pushy if no one tells them how to behave. The problem is that as the pups grow up, from about 5 months on, adults stop accepting some behaviors, and may start reacting differently if the pup doesn’t show the proper behavior.
So… if I were you, I would be more worried with the pup’s behavior than with the Labrador’s behavior. You need to get her used to being calmer around the dog, and to respect if he sometimes doesn’t want to be bothered. If necessary, channel her energy to activities not involving “nagging” the Labrador.
For this, and if you’re not used to interpret canine behavior, I would recommend you talk with a canine trainer. Formal “training” may not be exactly necessary (although it is useful for any dog), but rather some behavior modification, redirecting the pup to activities and games which will benefit everyone involved.
I hope this helps a bit…
Publicada por Aradik à(s) 13:06