Etiquette with older dogs (and their owners!)

(Versão portuguesa abaixo)
I have been through this with my first dog, and over the last few months with a severely ill dog. Seeing this article a few days after his death, and upon the comments I heard from strangers as my dog was getting worse by the day, it touched a sensitive nerve.


I think this is an article everyone should read!
Reprinted with permission from The Bark
Be Gentle: I know my dog is old
A call for improving our etiquette with older dogs.
By Susan Seligson 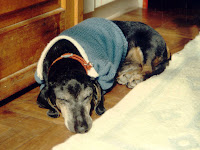 Like everyone else in a society loudly lamenting a decline in civility, I recognize there are new breaches of etiquette every minute. On any typical day, cell phones alone account for the rudeness factor going off the charts.
But I believe there is one type of impolite behavior among adult humans that goes pretty much unchecked. I’ve been guilty of it myself and slinked away feeling really stupid. It just isn’t something that makes it into the etiquette books and it apparently isn’t even worth Miss Manners’ fleeting consideration.
I am referring to the blunt, utterly uncensored and often just plain mean things people say to us about our dogs (by “us” I mean dog people). My close friend Pam has a 12-yearold German Shepherd who is visibly aging. So are the rest of us, human and canine, but to what person would you ever be so crude as to say the following: “Is that your mother? Wow, she looks awful. She can hardly move!” Yet this is the unsolicited blubbering my friend endures from strangers, all day long, about her old dog. I empathize because I’ve been through this three times, beginning with our family Beagle, Sam, who lived to be nearly 17, mostly out of spite.
“How old is he?” People would ask this unrelentingly about my now-departed Irish Setter, Amos. I didn’t mind telling them that he was 12 or 13. “Wow. They don’t live much longer than that, do they?” How tacky is this?
But it gets worse. When my big, hairy mutt, Louie (we called him our “Bavarian crotch-smeller”) was old and frail, someone once asked me, “Have you thought about putting him down?” First of all, that’s kind of like asking a woman in her 40s (this also happened to me), “Have you ever thought about having children?” “Gee, there’s an idea! Why didn’t I think of that?” When your dog is old and sick, the end is pretty much all you can think about. Your heart is breaking and you’re preparing yourself to come to that decision in a way that spares your dog unnecessary suffering while giving yourself time to feel as peaceful as possible about letting him go.
People assume they can say anything they like about a stranger’s dog. While they’d (I hope) refrain from saying, “Excuse me, but it looks like your husband is losing his hair,” when Louie was suffering from Cushing’s disease, strangers constantly took it upon themselves to point out his hair loss. “Do you know your dog is losing his hair?” And what can you do except mumble, um, yes, this is my dog, he’s part of my family, I’m nearly always with him, I bathe him, I brush him, he sleeps with us, and throughout most, if not all, of these activities, I am looking at him! And it’s always too late when you think of how you could’ve said, “Do you know you have a wart on your chin?”
Pam is at the point where she dreads walking her dog in public because she knows passersby will make insensitive comments she can’t bear to hear. Out in the world she is thoughtful and tender enough not to remind everyone she encounters that they are mortal. Like the rest of us, she can tell when a person’s on his or her last legs, but she keeps herself from saying, “Gee, you sure are slowing down” or asking the person’s daughter, “So how long do people in your family tend to live?” When approaching people like my friend, it helps to remind oneself that she knows her dog is old. She knows it every waking second of every day.
The last years and months we share with our geriatric dogs are among the most bittersweet times in dog lovers’ lives. We know, from the moment we choose these guys as puppies or meet their limpid stares at the animal shelter, that our hearts will be torn apart some day. What makes it so much worse is that the older they get, the sweeter they get, and when they reach absolute critical sweetness—you simply cannot love them any more than you already do—they grow completely exhausted and die. So a person patiently coaxing an old dog on his increasingly shrinking route is someone who could benefit from a little compassionate restraint. Like a simple hello for the owner, or a tender pat on the head for the doggie emeritus.
Publicada por Aradik à(s) 19:56