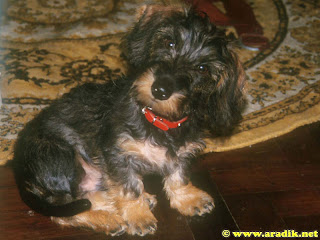 The first dog I had from puppyhood, Nikko, was afraid of people. And he was lucky enough (or unlucky enough, form his point of view) to be very appealing, with his scruffy look. When I took him out for walks, if we were lucky enough for people to ask me if they could pet him (because most wouldn’t even bother to ask, they’d just do it), I’d tell them no, and explain them that he didn’t like it so I didn’t want to force him into an unpleasant situation. My mother, meaning well, would say yes, go ahead, and if necessary would pick the puppy up so people could pet him better. Which, of course, would only make matters worse, as he was left without the possibility to choose what t do and eventually walk away.
If it was you, would you like it?
Just imagine… You’re calmly enjoying your walk, contemplating the views, watching passers-by when out of the blue comes a stranger to you, holds you, gives you a tight hug ad a long-time friend, pokes you all over and walks away. Confused? A bit up ahead, another person comes by, picks you up, smooches you all with kisses and baby talks at you and goes away. What the hell? Shortly thereafter these situations repeat. When will you run out of patience? In my personal case, I can say I’d quickly become a hazard to people’s physical integrity… ;)
Surreal? Without a doubt! Yet this is a reality for countless dogs on their walks – to be frequently intercepted by people who want to touch them, while they are expected not to have any negative reaction!

A dog on the street is a good dog?
When you see a child on the street, do you immediately assume he is well behaved? However, when they see a dog on the street, most people assume the dog will tolerate anything that comes their way. And indeed most dogs do know how to behave in public. But what about those that don’t? Oh, those their owners leave at home! What does that solve? A dog permanently locked up at home will never learn to behave on a human society. It is necessary that the dog comes outside, calmly and controlled, to lear the rules he is expected to follow. And for that it is necessary that the owner is willing to teach them, with or without professional help depending on the situation, and that other people respect the dog’s space and his need of learning.

Ask first
As soon as they see a dog on the street, most people, and specially children, will immediately go to him and start touching him. However, get used, and teach you children, to ask the owner for permission first. It is so 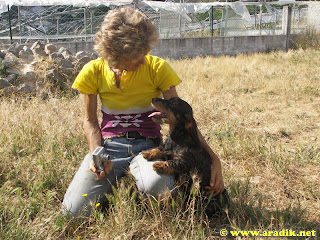 simples and so much safer! And it is a sign of respect for the owner and the dog. And respect what the owner tells you, whether you agree or not! I remember that in the rare occasions people asked my if they could pet Nikko and I told them no, explaining why, the typical reply was “oh, but he is so cute, of course he can’t be afraid of people!” What does being cute has to do with being afraid of people? In principle, the owner knows his dog better than anyone and is the best person (except in some situations a specialized professional) to assess how the dog will react in different situations. Indeed it is often because people will disregard the owner’s statement that leads some owners to systematically refuse any contact between their dog and other people, creating a vicious cycle in which the dog may even start to be (even more) afraid of people.
But don’t fall on the opposite extreme either! It is so common to hear parent to say to their children approaching a strange dog “Don’t touch the dog, he bites!” Why make children afraid of dogs? If you don’t want your child to touch the dog, would it be more sensible to explain him why they shouldn’t touch strange dogs and teach him to ask the owner for permission first?

Watch the dog
Even if the owner allows you to touch his dog, watch carefully if the dog really wants that contact. Many people accept strangers to pet their dog not because the animal likes it or because the owner really doesn’t mind, but because socially it “looks bad” if they refuse it. And forcing a shy or fearful dog to contact may worsen his fears and lead to situation which may endanger the person’s and/or animal’s physical integrity.
But is you watch the dog’s behavior, he will usually show a number of signs indicating if he is comfortable or not with the situation. Some stress signs (or calming signs, as they are more often called) are subtle and may go unnoticed for those who don’t know them – like the pulling back of the lips, or pupil’s dilatation, which is a physiological fear response and can be a preparation for a “flight or fight” response. Other signs are not so subtle but many people do not know how to interpret them correctly. Like the dog that turns the head sideways avoiding facing the person approaching him, he is not doing it because he saw something more 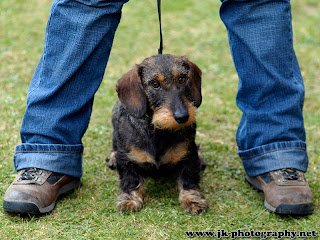 interesting elsewhere. Or the dog that starts yawning or licking his lips or nose, after all he hasn’t just eaten something delicious and a walk is not a time to be sleepy. But some signs are obvious – the unsure dog that approaches slowly and crouching, the dog that steps away from the person or hides behind or between his owner’s legs is clearly saying he is not comfortable with the situation. All this, of course, without the extremes of growling or snapping (a bite in the air, discouraging further approach). In this situation, why force? And run the risk of making this a very complicated situation to everyone involved?

How to approach a dog?
Ok, so you asked the owner for permission to pet his dog and the animal doesn’t seem uncomfortable with the situation. Despite that, it may not be the best idea to reach out to the dog, give him a big hug and a huge kiss on the face! Generally, dogs don’t like being hugged, even by people they know well. Actually, all it takes is to think that not only this gesture does not exist among dogs but also it takes away their choice to move away if they want. Even if dogs with a strong bond among themselves sometimes like to be in tight physical contact, usually the most similar to a hug dogs have is during hierarchy rituals or fights. It is thus easy to figure that this gesture has a totally different meaning in dogs and humans.
What to do then? Do not approach the dog straight forward, which is intimidatory for the animal. Avoid looking him straight in the eyes (do you like it when a stranger does that to you?), specially in the first moments until the dog is relaxed. Crouch down beside him, thus becoming more accessible while following canine protocol – unlike people, dogs great side by side, not straight forward. Let the dog decide to come to you. This is very important, as it allows the dog to decide if he is comfortable with the situation. You may even drop a hand, so he can sniff it. He may approach you and stay there sniffing, he may come, sniff and move away… respect his decision and do now go after him if he leaves.

Where to touch?
If the dog seems to be comfortable and seeks contact, usually the next step is people trying to pet him. This 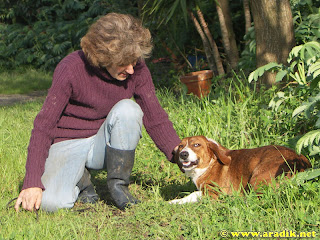 also often requires some self-control. Avoid sudden movements, which may scare the dog. People tend to go for the head, but most dogs don’t particularly like being petted there. Ask the owner if the dog has a preferred spot and/or try the cheeks behind the lips, behind the ears, the chest, shoulders, in the back near the tail… It is important that you do it gently, always watching the dog, and stop if the dog starts to show signs of discomfort or stress.

In short…
In order for everyone (people and dogs) to enjoy the sunny days approaching, all it takes is some mutual respect and common-sense. Most dogs like to interact with people, but unlike many seem to think, not all dogs are comfortable in that situation. All it takes is some common-sense from the owners and other people for walks to turn into a pleasant experience for everyone involved, and not a nightmare for the dog and the owner.
Publicada por Aradik à(s) 13:38 Sem comentários: