You can't just wish a problem away 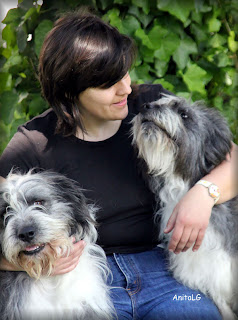 Dogs are not mechanical toys with a different behavior just according to the button you press. Just like people, they have different personalities; they will behave differently according to their character, education and upbringing.
To expect them all to have the same behavior in any situation is not only naïve but also potentially dangerous – for the owner, for other people and for the dog. If that is your expectation, maybe you’d be better off with a china dog. At least that one will not surprise you with its behavior.

Lately I’ve been contacted by several people asking for help with behavior and/or relationship problems with their dogs. And there are striking differences between some of them…

Think of some habit you’ve tried to change… Maybe your New Year’s resolution was to start exercising more? Or, with Summer approaching, you chose to start a diet and eat better? Or maybe quit smoking?
Did you make it? Congratulations! But it wasn’t easy, was it? Over the first few weeks you surely even thought about giving up! Changing set routines is hard, your body tells you to do one thing and your mind tells you to do another… even if it was a conscious decision!
Gradually, you realize those small subtle elements triggering our old habits – the coffee followed by a cigarette, the piece of chocolate at the end of a job well done, etc., and you struggle not to cave in.
For days and weeks everything looks hard and not working, but suddenly you realize you no longer have the same desires, the need to go back to the old habits. Success!
We’re talking here of a “simple” conscious change of habits, things we want to change out of our own free will. But if that is difficult even with us, it is even harder when we’re dealing with animals, as we can’t explain them that it’s for their own good and they’ll have happier lives if they change their behaviors.

Besides, behavior changes in dogs often (most times?) require a change of behaviors by their owners.
Dogs are experts in reading our body language and reacting accordingly, not according to what we think we’re transmitting.

Imagine this very common situation: you’re walking your large breed dog on the street. When you notice someone afar with their dog, what do you do? Unconsciously you tense up, grab the leash a bit more strongly, keeping it tense, and continue advancing.
Not going into the details of why this is all wrong (maybe that’ll be a theme for a new post), let’s see how this situation is perceived by the owner and the dog.
It’s easy to realize that what we wanted to transmit to the dog and what was actually transmitted are very different things, right?

Changing canine behavior in some situations also implies changing our own behavior. This implies we realize the details of our behaviors and routines, deepen our knowledge about canine body language and make a conscious and prolonged effort to change our habits, temporary or permanently.
You can’t just wish a problem away for it to actually go away!

What about you, what have you had to change in your routines for a better quality of life for your 4-legged companion and a better mutual relationship?
Publicada por Aradik à(s) 18:58