So you want to be a breeder?

A few weeks ago I was contacted by a girl asking me countless questions about my puppies and their husbandry. I am the first to encourage potential puppy owners to ask all sorts of questions, but something started smelling funny. When I asked her about it, she answered she was asking all those questions because she would like to be a breeder. This has left me thinking about it… 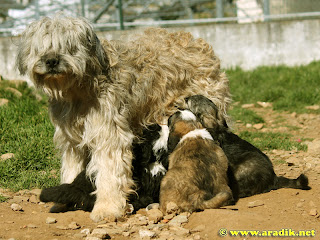 Who is a breeder?

In its Regulations of the Portuguese Studbook, the Portuguese Kennel Club defines a “breeder” quite simply as “the owner of the bitch when she whelps”. This is obviously a broad and objective definition, more than enough for its role in pedigree issuing.

However, it tells us nothing about the goals of the breeders, which are in essence their main differentiation. I wrote before on this issue, you can read it by clicking here.

On one hand, there are those who breed with an explicit commercial goal, aiming to get their income through the production of puppies for sale.
Pragmatically, there’s nothing fundamentally wrong with this, as long as the animals are kept under the proper conditions. However, on order to maximize income, “shortcuts” are often taken, namely in regarding health care and screening; feeding quality; morphological, behavioral and/or functional assessment; breeding frequency; age the puppies are sold; etc. Rather than “breeders”, it might be more correct to call these people “producers”.

On the other hand, there are those who breed because they have a bitch (or male) and, for any excuse reason, at a given phase of the dog’s life or regularly, decide to breed a litter, without a defined reason or goal to achieve.

Finally, there are the real Breeders, those with a capital B. They are typically people who hadn’t even thought about being a breeder. They’re people who fell in love with a breed, who got some dogs first and foremost for their own pleasure, who committed themselves to study everything they could about the breed – behavior, function, health and/or genetic problems, breeding lines, etc. -, who often adopted the dog fancy “as a hobby (show and/or working trials).
They are people for whom breeding comes as a natural continuation of this passion and the knowledge about their breed they acquired over the years, always trying to improve it and get increasingly better animals. When they breed, they do it as a very thought-out action, aiming to get one or more dogs for themselves; selling puppies is mainly a “by-product” of this quest. They invest a lot on their dogs and litters and rarely (if ever!) manage to make a profit out of breeding.

Should dogs breed at least once in their life? 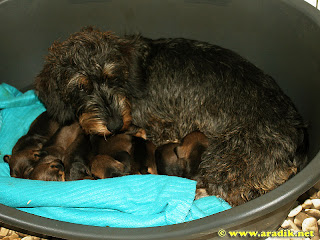 The myth that dogs (both males and females) should breed at least one in their life, so as they don’t get miserable/frustrated/insane, is still quite common!

This idea is maybe due to the fact that, as dogs grow up and achieve maturity, it is common to see them trying to hump chairs, sofas and even people’s legs, regardless of them being their owner’s or not. This does not mean, as many think, that the dog needs to breed or that he is trying to dominate his owner. It just means, quite simply, that the several sexual behaviors are starting to integrate and coordinate as a coherent functional chain.

As for the females, it is enough to think that in social wild canids in stable packs, most females defer breeding to the dominant female, so lack of reproduction does not affect them. Furthermore, any pregnancy in any species is always an additional stress and risk, which can indeed affect the animal’s quality of life.
Also, as far as we know, dogs are not capable of deep though moments; they cannot look back to their more or less distant past or future and think “Oh, how I would like to be a mother/father!”

The “miracle” of life

One of the most common excuses arguments used by those who breed their bitch without a defined goal is that it is important for their children to see the “miracle” of birth and life.

Well, I hope they are also prepared to teach their children about the “miracle” of the emergency trip to the vet if something goes wrong during whelping. And to teach them about the “miracle” of death – because even if nothing goes wrong during the birth and the female doesn’t die (it is always a risk to consider!), it is common that one or more puppies die during the first few days post-partum, due to a number of reasons.

What to do about the puppies? 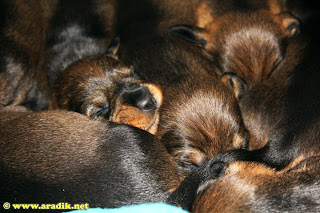 If you are breeding because you want a puppy from your bitch/male, what to do to the rest of the puppies? Because hardly only you one puppy will be born…
If breeding because “it is important that children know how a birth occurs”, what to do to the puppies?
How many of us haven’t received, by e-mail or through social networks, forwarded messages from well-meaning friends, saying that “X puppies belonging to breed Y need to find an owner during next week or they will be put down”?

If you don’t have some previously arranged homes for your puppies, why are you breeding in the first place?
Are you prepared to explain to your children why you showed them the “miracle” of birth and then dumped the puppies somewhere or put them down because no one wanted them and you don’t have space/conditions/enough money to keep them?

Nowadays, even well established breeders, often with reserved puppies, are having increased difficulties in homing their dogs; many people show an interest but don’t follow through, others cancel their reservations due to (un)expected changes in their lives. For those who are not known in the breeding circuit, it is even difficult to find good homes for their puppies. Well, at least for those who take care in placing their puppies in homes that will not abandon them at the first "excuse" “problem”.

It is known that dogs, according to their breed and/or size, are more or less prone to certain diseases. Even if their parents don’t exhibit them themselves, they may carry genes for some of them, and produce affected offspring if mated to other carriers; they may also be affected but not show them because they are still young (some diseases only show at later stages of life).

A person who only wants to breed for the sake of it will usually not worry about the possibility of producing sick dogs (after all, we always expect the best, we never think about what could go wrong, isn’t it?). Actually, some do it even knowing their dog has some kind of problem, just because it’s their favorite and they want offspring from him/her.

However, a serious breeder will naturally try to avoid breeding potentially sick puppies. How? By examining their potential breeding dogs, whether through genetic testing (if the genes for the diseases in cause have already been discovered) or by screening tests (trying to assess if the dog has clinical symptoms of the disease, even if they don’t show them openly).

Don’t think that, because you have a mongrel dog, or are breeding dogs of different breeds, you don’t need to worry about this. After all, the genes are the same throughout the whole species, even if the frequency of their alleles may vary. For example, large breed dogs are more prone to hip dysplasia, whether or not they’re purebreds. Breeding dogs belonging to two different breeds is not a reason not to test your animals; if both breeds are prone to the same disease(s), the puppies will not miraculously stop being affected just because they are crossbred!

Even if everything goes well, breeding isn’t just about putting a male and a female together, giving birth to the puppies, letting them grow up and hand them over to other people. It is an activity requiring time and dedication, so the puppies may have the best possible start.

It is necessary to weed out potential puppy owners, trying to ensure the future owner is capable of dealing with what can be expected from the breed’s typical behavior and trying to match individual characters of owners and puppies.

Breeding dogs does not take pity of the bitch’s owner chores. Is the mother incapable of taking care of the puppies for any reason (disease/death/insufficient milk/rejection)? It is up to the breeder to nurse them every 2 hours, day and night. Are you ill, depressed or having a family crisis? Tough, the puppies need to eat! Do you have a 9-18 h job and no one at home? Tough, the puppies need to eat! If you took the responsibility of bringing a litter of puppies to this world, we must also take the responsibility of raising it properly, even when their mother cannot or will not do it.

Decisions and dilemmas are part of the daily life 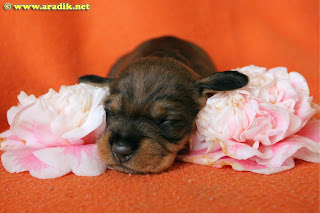 And what to do with that weakling, the puppy who would not normally survive? Should you try to save it at any cost, even knowing that in the long run that may negatively influence the breed’s viability and sturdiness (when latter on you breed with dogs that “shouldn’t” have survived)? Should you let it die, as that is what would have happened in a normal situation (but in a normal situation the bitch probably wouldn’t even bred)?

There is not a correct answer, a single or easy answer, but this is the type of moral decisions and dilemmas a breeder faces in each litter…

Do you still want to breed?

Breeding dogs and watching them grow up is indeed an unforgettable experience! It demands a lot of time and commitment, but when everything goes well, the benefits (for the breeder and the future owners) outweigh the concerns.
But you need to be prepared to the complications, something most people don’t like to think about and for which an inexperienced person (and sometimes even an experienced one) is usually unprepared for.

Think carefully if you want to breed your dog (male or female), ponder well on the reasons why you want to do it and think about what to do to the puppies (yes, this is also the stud owner’s responsibility, not just the bitch’s!). Most times it is better, financially and emotionally, to spay/neuter your dog (to avoid undesired mating and the troubles that come with it) and leave breeding for serious passionate breeders, who are willing to sacrifice themselves so each puppy born may be the best possible and lead a happy life from the beginning.